It Was Not In San Francisco 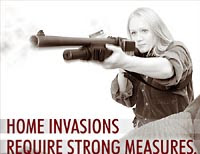 5-2-07 -- Two illegal aliens, Ralphel Resindez, 23, and Enrico
Garza, 26, probably believed they would easily overpower a home alone
eleven year old Patricia Harrington after her father had left their two
story home. It seems the two crooks never learned two things: they
were in MONTANA [not San Francisco], and Patricia had been a clay shooting champion since
she was nine. Patricia was in her upstairs bedroom when the two men
broke through the front door of the house.

She quickly ran to her father's room and grabbed his 12 gauge
Mossberg 500 shotgun. [the absolute best choice for home defense]

Resindez was the first to get up to the second floor only to be
the first to catch a near point blank blast of buck shot from the
girl's knee crouch aim.

He suffered fatal wounds to his abdomen and genitals. When Garza ran
to the foot of the stairs, he took a blast to the left shoulder and
staggered out into the street where he bled to death before medical
help could arrive.
It was found out later that Resindez was armed with a stolen .45
caliber handgun he took from another home invasion robbery. The
victim, 50 year old David Burien, was not so lucky as he died from
stab wounds to the chest.

Patricia staved off a robbery and potential rape because her
parents taught her how to use a gun. Her parents just didn't hide a
gun in the house and not educate her on the power that a firearm
provides.

Ignorance can be deadly, but fortunately for this Montana family,
knowledge was power.

nice one!
I'm going to "borrow" that for Crusader Rabbit, Leonidas. (with attribution)

Sorry, guys this story is bogus.

Elija is right. Snopes fails to confirm the story.