Get Out of Jail Free 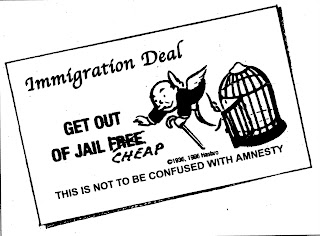 The U.S. Senate continues to debate the "Comprehensive amnesty Immigration" bill and from all appearances it will pass even in the teeth of opposition by a majority of the citizens who are aware of its provisions. Should it pass both houses of Congress and arrive on President Bush's desk, he will doubtless sign it. In signing this travesty into law he will be in effect PARDONING upwards of 12 million criminals. This will put to shame any claim that Bill Clinton handed out pardons like candy to criminals such as Mark Rich et al. One thing can be said of Clinton; at least he received a quid pro quo for his pardons in the form of cash or other gratification (if you know what I mean).

I can understand the logic behind the Democrats' support of the amnesty bill; after all, every one of these illegal immigrants is a potential Democrat voter. What is unclear as yet is the reasoning behind Bush's support for it while at the same time neglecting to pardon Lewis Libby who has in effect been sentenced for a crime he was not convicted of. Is Bush intimidated by the resulting caterwauling on the part of his enemies, thus losing additional political capital? In the words of John Stossel: "gimme a break". The entire Plame/Wilson affair was a political witch hunt. What does Bush have left to lose except what remains of his support by conservatives?
at 10:04 AM

Bloody hell! I'd love to live in the U.S.--maybe I should just get a tourist visa and not bother to leave?
What's the point of trying to do it legally?