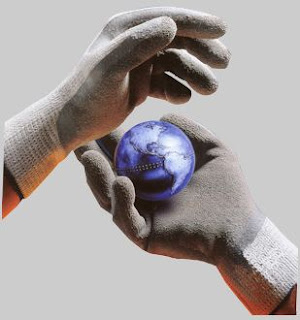 We now learn that the genocide committed by Muslims against the Christian tribes in the Darfur region of Sudan is really caused by (are you ready for this?) "man made global climate change". Now aren't you ashamed of your last fuelup at the local Citgo gas station? Some time ago a wag averred that the environazis would soon be blaming any unpleasantness in the world on man made global warming. Our chuckles indulged in at that time seem now to ring eerily hollow. The United Nation's CEO has signed on board the new religion which insists that the omnipotent government (preferably one with global reach) be assigned to solve this vexing problem by devising new taxing and freedom limiting schemes but without the application of military power. How novel!

But here in the U.S. one is shocked to learn that the government may not be omnipotent:

The illegal immigration question is an interesting test of government in action, at least when it comes to core responsibilities like defense of the nation. When critics of this "comprehensive" immigration bill demand enforcement of the borders, the administration says: Boy, you're right there! We're with you on that! We want enforcement, too. But we can't get it as long as you're holding up this "comprehensive reform."

Why not? There are immigration laws on the books right now, aren't there? Why not try enforcing them? The same people who say that government is a mighty power for good that can extinguish every cigarette butt and detoxify every cheeseburger and even change the very climate of the planet back to some Edenic state so that the water that falleth from heaven will land as ice and snow, and polar bears on distant continents will frolic as they did in days of yore, the very same people say: Building a border fence? Enforcing deportation orders? Can't be done, old boy. Pie-in-the-sky.

How are we to resolve this seeming paradox when we are also assured by our "leaders" that although we are at war with "terrorism", retaliatory attacks on those who routinely act on their wish to kill us result only in "innocent civilian" casualties? It would appear that our "leaders" are really only interested in two things; more power over us and continued enjoyment of the concomitant perquisites associated with the exercise of that power . Only an idiot or a politician would argue for granting the government more power over us, but then again, these are truly strange times.

The people in Darfur are predominantly black Africans of MUSLIM beliefs, whereas the Janjaweed militia is made up of Arabs. So racism is at root of Sudan's Darfur crisis. But there also are minority Christians in Darfur, and they do not receive aid because of discrimination.

That was just an observation in the margin. You write almighty good!

"Only an idiot or a politician would argue for granting the government more power over us, but then again, these are truly strange times."

Ain't that the truth!